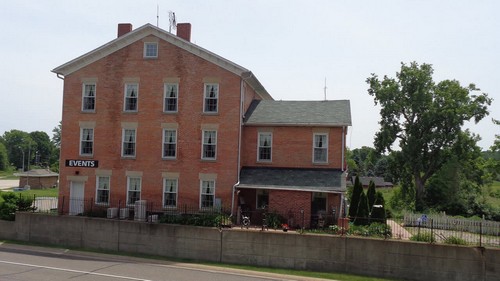 In 1853, Walker’s business had become so lucrative that he built the Brick Walker Tavern across the street. The new brick building offered private rooms, a dining hall, and on the third story, a dance hall.

However as glorious as the building was in its heyday, with decades of disrepair, the building became dilapidated. Fortunately, Tom Lee and his family were looking for a cottage to buy in the Irish Hills area. Tom Lee is a businessman who owns and manages properties and whose passion is antiques. It was very understandable that when Tom kept driving by the rundown Brick Walker Tavern, he saw the potential that lied within. He purchased the property.

Tom found contractor, Jim Miller, who understood Tom’s vision and they have completed a ground-up restoration of the Tavern and the Barn. Tom’s philosophy is to always make things better. His goal was accomplished.

Brick Walker has been placed on the National Register of Historic Places.